Allure of the Woods

When I was in high school, I used to pilfer cigarettes from my grandmother’s pack—Lark filters—and sneak off into the woods to smoke them one after the other. 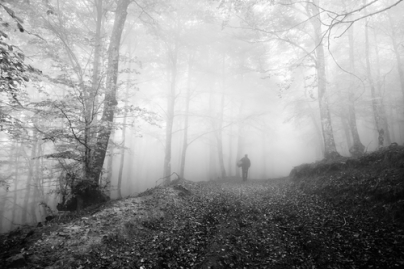 In my New England hometown forested lands were vast and still are, now protected by private land trusts. As kids, we played in the woods with abandon. We were sure of our safety, though acutely aware of our surroundings and the possibility of bears, fisher cats, and hunters. We wore bright clothing and screeched and roared along the trails. We scouted for terrarium plants: winterberry, princess pine, and small White Oak saplings we could prune like bonsai. We explored the ponds and streams searching for spotted salamanders and crayfish. And we peed in the woods whenever possible. Consequences were of little concern. We were invincible, and the allure was too great.

But on that long ago September day, my foray was surreptitious. I did not want to be heard or seen. I stood off the trail and sucked that tobacco smoke into my lungs, savoring the heady feeling. When I had snuffed out the butts and dropped them into the stream, I headed out onto the wider dirt road toward home. I didn’t want to be gone too long.

But I was not alone out there, and I was not safe, either. An older boy from my high school, an upper classman I recognized, was out there, as well. He was behind me and off the road. He tracked me, a BB gun slung from his shoulder, and soon aimed and fired at me.

He missed. I screamed and ran.

He followed, firing more pellets. I demanded he stop. He didn’t. The pellets whizzed by me, ripping leaves, thudded into tree trunks, but never hit me. My heart raced, my adrenaline pumped. I was a strong runner that day.

Why, I wanted to know, though the question seems more pertinent today. Why pick up a gun and aim it another human being and pull the trigger? I’m sure this kid who shot at me had gun safety education. It was a course in demand at our high school.

But that is part of the problem—gun safety education courses are ineffective, according to Marjorie Sanfilippo, a pioneer in studying the efficacy of gun safety programs. There are extensive weeklong courses where children are taught a mantra day after day: If they find a gun, they are not to touch it. They should alert an adult immediately. These courses fail, as well. What consistently happens in study after study is this: Children who find a firearm, handle the gun, aim at their playmates, and pull the trigger. What they learned and were told to do is cast aside. The allure is too great.

This is what children actually learn and it is reinforced through games, books, and movies: Iconic spies, bad guys with guns, and the hero who defends everyone else with a gun are cultural messages about who we are as people and how we make our place in the universe. Those characters most always drive cars that wow—because guns and cars have become the cultural symbols of entrance into adult life. They represent the illusion of power, mastery, and control of a young person’s world. And not just young people—adult children wrestle away the car keys and firearms again and again, mostly from their reluctant elderly fathers. The taking away is equally symbolic.

In the standoff about guns and their laws, both sides fail to look at the deeper questions of the cultural divide. We as a nation are neither likely to ban guns anytime soon, despite the daily carnage of gun deaths; nor are we to see every citizen armed, including young children.

We continue to act like teenagers in the woods, shooting at each other because it seems irresistible. The allure is too great; we believe as Americans, we are invincible. Damn the consequences.

Star In Her Eye

Sharing Information About Writing and Illustrating for Children

An Irishman's blog about the English language.

Weirdness, Esoterica and Forsaken Places in and around Vermont

Life in the pages :) Literature Obsessed, Lover of Art & Photography... Say Hi and Stick Around.

I have people to kill, lives to ruin, plagues to bring, and worlds to destroy. I am not the Angel of Death. I'm a fiction writer.