The most enigmatic Trumpian warning was written more than thirty years ago . . . 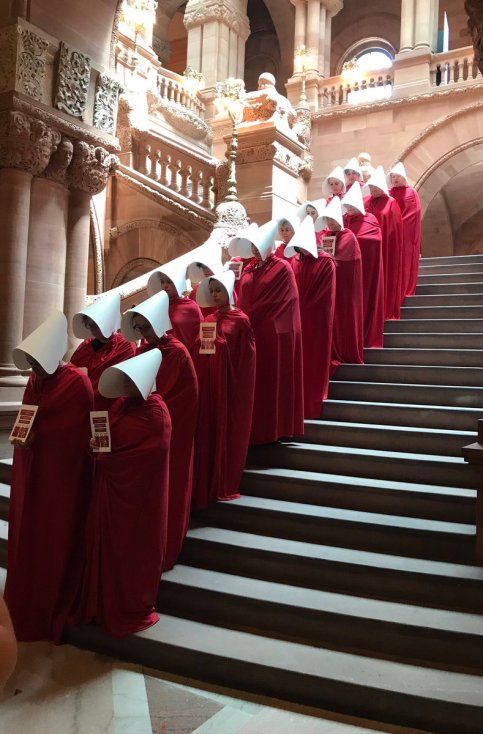 . . . It was an unwitting and prescient novel that blossomed in the spring of 1984. The author, Margaret Atwood was deeply affected by time and place, by her own history, and circumstances that unfolded around her. And so she began to scrawl onto yellow legal pads what would become The Handmaid’s Tale.

She was living in West Berlin back then, the city still encircled by the Berlin Wall with its armed guards, barbed wire, and the hush of pervading fear. During occasional trips behind the Iron Curtain to East Germany and Czechoslovakia she says, “I experienced the wariness, the feeling of being spied on, the silences, the changes of subject, the oblique ways in which people might convey information, and these had an influence on what I was writing. So did the repurposed buildings. ‘This used to belong to . . . but then they disappeared.’ I heard such stories many times.”

Add to the mix that Ms. Atwood was a child of World War II, born the year Hitler invaded 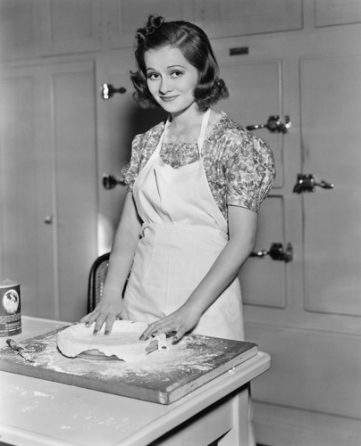 Poland. She understood, as precocious children do, that the world can be upended in ways that defy the gravity of reason, shared humanity, and respect for the rule of law—a dystopian view, to be sure. But unlike many apocalyptic authors, Atwood writes from a reality grounded in the everyday and in the competing threads of American culture. In her fictional world, there are still hollyhocks growing in the garden, children who are wanted and loved, fresh bread and hearty soup from home kitchens, along with worship and community, albeit a punitive and barbaric, patriarchal theocracy.

“I experienced the wariness, the feeling of being spied on, the silences, the changes of subject, the oblique ways in which people might convey information, and these had an influence on what I was writing. So did the repurposed buildings. ‘This used to belong to . . . but then they disappeared.’ I heard such stories many times.”  Margaret Atwood

The Handmaid’s Tale is informed by the Puritanical thread that still knits through American culture and Old Testament history of handmaids: Jacob, father of the Twelve Tribes of Israel, in a story of betrayal and jealousy, marries his cousins Leah and Rachel, and in turn, Jacob is offered his wives’ handmaids, Bilhah and Zilpah as surrogates—without their consent. Atwood deftly illuminates the battle that women, in particular, and all minorities have faced: the struggle for equality, employment rights, marriage, sexual, and reproductive autonomy. Like various populations that are marked by clothing: the Star of David that European Jews were forced to wear in the mid 20th century, the stripes and jumpsuits of inmates, the seductive clothing required by some contemporary chain restaurants; Atwood’s handmaids are required to wear white bonnets like blinders and red cloaks: the color of fecundity, of blood and the childbed. 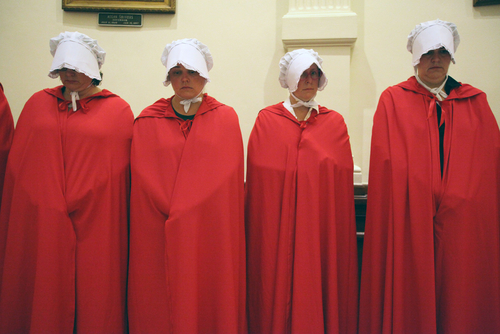 Yet still, we fight for human rights, for women’s rights. The struggle seems more prevalent in recent years as the mix of government and religion intersects in ways once prohibited. In 2014 the U.S. Supreme Court decision in Burwell v. Hobby Lobby Stores held that corporations in which fewer than five people own more than half the stock, the corporation may choose to exclude contraceptive coverage from their employees’ health insurance plans created under the Affordable Care Act, if the use of contraceptives violates their (the employers’) religious beliefs—a precarious seesaw of employer’s beliefs balanced on the headboards in employees bedrooms.

Atwood deftly illuminates the struggle that women, in particular, and all minorities have faced: the struggle for equality, employment rights, marriage, sexual, and reproductive autonomy.

Ingeniously, women dressed in the garb of handmaids—white bonnets and red capes—have shown up conspicuously around the country in visible protest.

They arrived in Washington, D.C. to protest defunding Planned Parenthood. At the statehouse in Columbus, Ohio, during a hearing regarding a bill that would outlaw a simple abortion procedure, like the handmaids in Atwood’s novel, they sat silently. Their presence did not need words.

They showed up again in Concord, New Hampshire in support of the expulsion of Republican State Representative Robert Fischer who posted to “The Red Pill,” a men’s rights forum know for its misogynistic content.

In Austin, Texas there was another handmaid protest concerning restrictive abortion laws, and another at a fundraiser for Senator Ted Cruz. The breathless silence of the red cloaks said it all.

In Missouri, a group of women in red and white with signs that read, Nolite te bastardes carborum dorum, a quote from the novel, protested a budget provision designed to prevent poor and uninsured women from choosing family planning services provided by health centers, hospitals, or doctors who are refers for abortions.

Ingeniously, women dressed in the garb of handmaids—white bonnets and red capes—have shown up conspicuously around the country in visible protest. 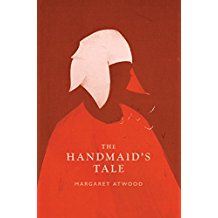 I first read the novel nearly twenty years ago. It is one of those reads that has stayed with me, one that I carry, internalized in my being. I have reread it every so often, and again, just last month. It has been reproduced in a play, an opera, a movie starring the late Natasha Richardson, and most recently, and most accurately, as a series starring the wonderful Elizabeth Moss. Margaret Atwood has graced the production as an advisor and appears in a cameo role—thus the accurate portrayal.

I applaud these women; the handmaids who showed up, who protest what has gone on for centuries, and I hope those who are unfamiliar with the novel will discover its relevant story.

We all have been handmaids in one way or another.

Star In Her Eye

Sharing Information About Writing and Illustrating for Children

An Irishman's blog about the English language.

Weirdness, Esoterica and Forsaken Places in and around Vermont

My name is Missi and I read and review all books and share my thoughts here.

Life in the pages :) Literature Obsessed, Lover of Art & Photography... Say Hi and Stick Around.

I have people to kill, lives to ruin, plagues to bring, and worlds to destroy. I am not the Angel of Death. I'm a fiction writer.